On November 20, 2011, I was happily coupled with my best friend and one of the greatest loves of my life.  We lived in a house that we’d chosen together to be Our Home.  I enjoyed positive and/or close relationships with his parents and his sons.  Our family was my highest priority.

Late on the evening of November 21, we had a disagreement that grew into an argument and then exploded into a full-blown fight.  The episode reached its climax when Ex-BF confessed that he’d been unfaithful to me a few years earlier.  He went on to explain that the Other Woman had recently come back into his life and was pressuring him to pick up where they left off.  Through tears, he assured me that he deeply regretted his previous actions and that he didn’t want to give in to the temptation this time around.  While he insisted that she wasn’t the kind of person he wanted to share his life with, he also made it clear to me that he was not willing to cut her out of his life.  She was a friend (?) and she was going through a rough time.  He wanted to do what he could to help her, even if that meant overstepping my boundaries for our relationship.

I examined the situation from all angles.  I tried to put us back together.  I was willing to forgive him and work through it, but we just couldn’t be *us* with an extra piece in the puzzle.  I told him I wasn’t going to stand around while she threatened everything we’d built together- he needed to take a stand and make a choice.  He refused to choose (“if you choose not to decide, you still have made a choice.”), so I packed what I could fit in my two vehicles, and I left (later that night, I wrote this post).

Hours after I vacated my home, the OW swooped in to comfort my then-distraught ex-partner.  They drank my wine from my wine glasses and soon after, she began sleeping (and more than that too) in my bed.  Within two weeks, she moved her kids in as well.

The writing was on the wall.  Life as I knew it was over, and I was a confused and broken mess.  I didn’t know it was possible to be so, so sad.

We’re not friends.  We’re not even friendly (and the lack of peace is painful).  We tried for a while, but I don’t like the person Ex-BF has become.  It hurt too much to see him that way and I don’t want that kind of toxicity in my life.  When I withdrew, he turned on me and angrily declared us “enemies”.

I still miss the boys.  Terribly.  Ex-BF introduced Drake and Josh to the OW before he let me talk to them about our situation.  In the beginning, he promised them that they would continue to see me.  But then he decided it was best for them to focus on their new stepmother and he preferred not to “confuse” them by allowing any contact with me.  I think about them every day, and I hope they know (or someday realize) just how much I love them.

I’m a published author.  I’ve heard (mostly) good things from those who’ve read my book.  My signing events have been well-attended and I’m ecstatic to report that The D-Word will be on display at several divorce expos around the country in 2013.  Hurray!

I’m living my own life.  For the first time ever, I’m setting my own goals and chasing my own dreams.  I’m not watering down my wants by compromising them with those of a significant other.

I love my home.  My house has taught me a lot in the past year.  I’m so glad I stopped to listen.

I have some pretty awesome friends.  Specifically:  girlfriends.  I find it interesting to note that, as I age, females are getting funner while males… aren’t, as much.  I’m ever-so-grateful for the sacred chick circle of which I am now a part.  Oh, and you know what’s even cooler than having friends?  Being one. 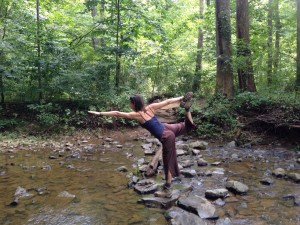 I’ve found my way back to the mat.  By re-integrating yoga into my life, I’ve retrieved a long-lost piece of myself.  It feels fantastic.

I get around.  (No, not like that.)  I now have the freedom to indulge in my own recreational preferences.  Since May, I’ve been to 3 farms, 6 state parks, 2 battlefields, 3 beach areas, 3 rivers, an exotic animal sanctuary, a drag strip, various other hiking trails and a musical boulder field.  And some of those places I visited twice.  And to think… there was a time when I worried about how I’d spend my weekends!

I’ve learned and re-learned the following…

Accept what is.  I can’t change anyone else and I can’t undo the past.  It’s best to accept reality and make that proverbial lemonade… or orange juice… or banana smoothies as the case may be (all after a good cry, of course).

Set boundaries.  In all areas of life/work/love/etc.  It took me a long time to designate an appropriate boundary with Ex-BF.  I didn’t want to seem too weak or too bitchy or too… eh, whatever.  I finally realized that I had to take care of myself and create an environment in which I could heal and grow.  That meant allowing more sunlight and less shadows.

We all have our own reality.  (This is a little disturbing, but it’s oh-so-true) At one point, I received a text from the OW requesting that I remove more of my belongings from the house, because she needed to make room for her things.  “I want you to have what belongs to you, if you want it.” She wrote.  “And that’s my truth.”

I was angered, to say the least.  How dare she say that now?  I wondered (aloud, to anyone who would listen).  After she didn’t want me to have my home or my family!

And then I realized, she didn’t see it that way.  She didn’t believe it was wrong to engage in intimate relations with my partner.  She didn’t feel guilty about drinking my wine.  She couldn’t fathom my motherly feelings toward Drake and Josh because, to her, I didn’t exist.  She didn’t see me as another woman or even as a human being.  She viewed me as… an obstacle, perhaps?  In any case, in her world, she felt only the joy of succeeding in her conquest.  She was blissfully ignorant to the pain endured by others.

In some way, we all construct and subscribe to an independent version of reality.  I shudder to think that I, too, have been guilty of such blindness.

Have compassion and forgive.  Although Ex-BF and the OW did some awful things, they’re not intentionally bad people.  Like all of us, they’re battling their own demons and trying to squelch their own pain.  While they’re not worthy of my friendship (appropriate boundaries!), I still offer them my forgiveness.

Sometimes people do messed up stuff  (and that’s their problem).   It was/is superhard to stop protecting Ex-BF.  First, I blamed the OW for being manipulative.  Then I turned myself inside-out trying to figure out what I could’ve done better (he openly blamed me for not “fighting for him”).  And both approaches were wrong.  Ex-BF’s actions were and continue to be his choice.

Gratitude makes everything a little better.  Being grateful (even for a chair to sit in) during hard times can transform desperate darkness into a shimmering landscape of miracles.

“Want your life forward”.  In a fit of self-pity, I once told a friend, “I just want my life back.”

“Don’t want your life back,” he instructed.  “Want your life forward.”  It’s the best advice I’ve ever received.

One year later, the pity party is over.  In grief, I found gratitude.  In solitude, I found serenity.  In living, I’m learning.  In giving, I’m growing.  The road is wondrous and I’m thankful to have found my way to the front seat… 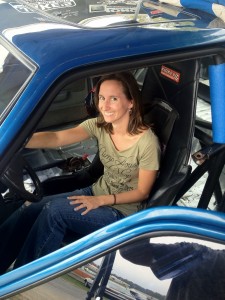