Divorce and The Solar Eclipse. What Nature Taught Me About Marriage.

I was about ten years old when I learned the definition of a “solar eclipse”. As my teacher described how the sun, moon and Earth align to create the phenomenon, I stared in awe at a photo in my science book. I was amazed, and I wanted to see it in person. Yesterday, I did.

Since the event, I’ve spent a lot of time reflecting. Like so many other things in nature, I thought about the eclipse as a metaphor, and I drew parallels to human relationships…

The sun and moon are kind of like a divorced couple.

You might say they’re the parents of Earth, as we divide our time between the two of them– the sun’s masculine energy reigning during the day, while the moon provides a comforting feminine presence at night. You might also say they’re like a divorced couple in the way they don’t often appear together. Occasionally you see them in the same sky, but they keep their distance. Sometimes they square off against each other, placing the Earth in the middle while the sun uses the Earth to literally throw shade on the moon. (Not a cool move, parents)

We don’t see them come together. We don’t regularly feel the effect of our Heavenly Father and Mother united above us. But yesterday was different.

I wasn’t expecting it go down the way it did.

I brought a lot of competitive energy to my blanket beside the duck pond where I watched the eclipse happen. I thought the event was going to be about Feminine Power rising up to black out the overbearing sun (take that, Patriarchy!). As a woman, I wanted to feel powerful and validated. I anticipated something deeply (and darkly) intense. 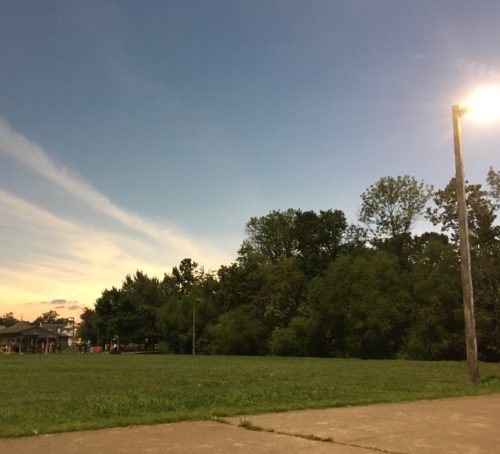 Intense, it was. As the shadow of the celestial union began to wash over me, the temperature dropped and I felt a little scared. I looked around. Ducks were quacking, insects were buzzing and street lights came on. I looked up, directly at the corona, and I felt moved. I couldn’t decide if I wanted to laugh or cry. In the sky, I could see Earth’s half-sister, Venus, yet it wasn’t terribly dark.

For those moments as the sun and the moon passed each other, I felt neither powerful nor validated. There was no competition to be won or lost. Quite the opposite, actually… the union was harmonious. I, and everyone around me, gasped in awe.

As the bright sunlight returned, I cheered with the crowd. The display had been truly magnificent, greater than anything I could have imagined when I was ten years old and staring at a picture in a book. I also felt a bit relieved to return to Daytime Status Quo.

The eclipse showed me that it’s possible to have a peaceful encounter with those we naturally oppose. And amazing things can happen when we are in alignment with others (even those we rarely align with). …It also reminded me that the space and balance between the sun and moon is necessary. Seeing them together was incredible and inspiring! But if they stayed together, no flowers would grow in their compromise. Each has its own purpose, and in order to fulfill that purpose, it’s best they maintain separateness.

(For another perspective, check out this comic from The Oatmeal)