An American Marriage, a novel written by Tayari Jones 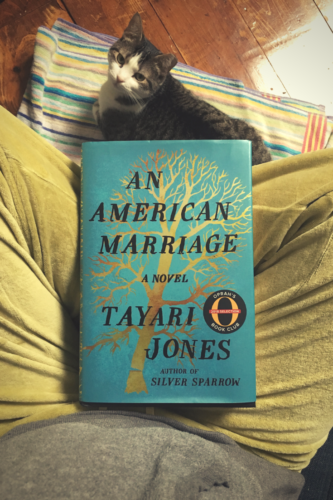 I discovered An American Marriage last month when the author, Tayari Jones, came to Harrisburg. She delivered the opening keynote for the 2018 Book Festival at the Midtown Scholar (worth a stop, if you’re ever in the area). At the last minute, I bought a ticket, drove downtown, and then waited in line. I received my copy of the novel on my way in the door, and then proceeded to the front row and waited an hour to hear the author speak.

I began reading immediately, and was introduced to Roy Hamilton. As I turned the pages, I learned that Roy was wrongly accused and convicted of rape. He was taken away from his wife of 18 months and would serve five years out of a 12-year sentence before his release into a changed world.

An American Marriage is about marriage, prison, love, redemption, fathers and sons, men, and women.

The story itself is told from the perspective of Roy, his wife, Celestial, and their friend Andre. As you might guess, the three of them wind up in a love triangle. Through their narratives, they speak not only of themselves, but also about their parents’ marriages that shaped their youth.

As I read, I pondered the topic on the cover. I thought about the bonds of marriage and the many ways in which they are broken. I thought about the devotion that exists between partners who’ve shared decades. I wondered what is “right” and “wrong,” given the circumstances. I considered these American Families:  their structure, their histories, the threads of love and legality that bind them together. I wished. I winced. I wondered how it would end. And, at the same time, I didn’t want to know.

I know I usually write about divorce, but you can’t talk about divorce without talking about marriage too. And An American Marriage presents plenty to discuss.

Seriously, consider snuggling up with a copy this winter.