The Ballad of My First Car (and marriage) - Relative Evolutions

My first car was a 1989 Chevy Corsica, and her name was Cecilia. I named her (as I do all my vehicles) after a song. In the beginning, Cecilia was mostly blue, but her defective paint peeled off in strips, leaving large patches of gray primer. Due to a couple minor accidents, she also sported a silver bumper and one of her 4 doors was red. The red door had manual controls where the others had powered buttons. 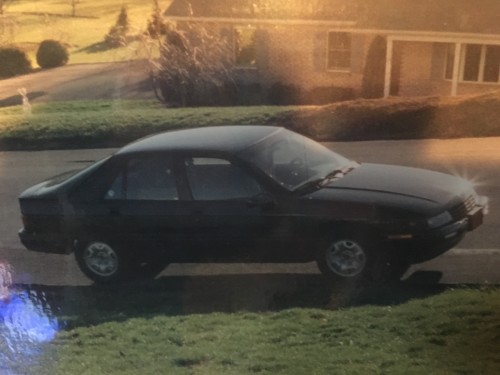 A few months into our relationship, my dad painted Cecilia black and gave her a red pinstripe. As a finishing touch, I adorned her with an airbrushed vanity plate that said “Back in Black.” She looked amazing. Or at least, she looked amazing to me.

I loved that car (and in a way, I still do). I loved the 5-speed transmission, the hydraulic clutch and the way the dome light would flash when I hit a bump. I loved the sticking door lock that required me to push the power button several times.  I loved the iron-on frog patches I adhered to the head rests on the seats, and I didn’t mind (too much) that the manual door leaked if parked on a particular angle.  I drove through a lot of frustration and made a lot of memories in that car.  We were a team.

I loved Cecilia so much that I couldn’t bear to get rid of her when I bought myself a new (used) stick-shift Saturn sedan for my 21st birthday. The following year I traded the Saturn for a Camaro (my teenage dream car) and Cecilia became my very important bad-weather vehicle.  We were still a team.

Fast forward a couple years…  A mechanic led me into a dimly-lit garage bay where Cecilia was on the lift. I followed him as he pointed out issue after issue. At one point, he flicked his finger at the catalytic converter and the top part popped off.

“You see that?” He asked. “That’s not supposed to happen.”

After traveling well over 200,000 miles, Cecilia was wearing out. The mechanic suggested I consider an alternate vehicle and pointed me towards a Chevy Lumina. It was a few years newer, had fewer miles and cost less than the necessary repairs for Cecilia.

Following my test drive, I sat in the Lumina and faced my then-fiancé. I wasn’t happy.

“This is a black Chevy with a red pinstripe,” Greg said.

Greg looked at his feet, reached down and pulled off a loafer. “And I love these shoes,” he told me. “I’ve had these for years, and they’re my favorite pair.”

“But, they’re falling apart.” Greg held his shoe out for me to see. “The stitching is coming undone and the sole is wearing through. Very soon, I’m going to have to buy new shoes.”

I sighed under the weight of truth.  He was right about the shoes, and his metaphor wasn’t lost on me. I bought the Lumina.

Although I loved Cecilia, our relationship was no longer appropriate. I couldn’t trust her, nor could I adequately provide for her.  We’d had a good run together, but it was time to move on.

Years later, Greg and I met the same fate. We’d each grown as individuals, and we wanted different things. We couldn’t meet each others’ needs, and we were no longer compatible. By the end, I think we both felt like his old loafers (cue the Randy Travis song An Old Pair of Shoes), and we were relieved not to have to force another step together.

Heartbreaking as it may be, there comes a time when the kindest thing you can do is to let go.