Last month, Rielle Hunter apologized for her affair with John Edwards.  She also announced a new book— a kind of amendment to her first book, in which she annotates her regrets.  The announcement was met with mixed reviews.

Some cheered for Ms. Hunter’s public act, while others suggested her effort was too little, too late.  Personally, I’m of the opinion that her apology to the masses was a courageous move.  I do question her sincerity, given the fact that she stands to profit from this endeavor.  … And I also think that what we think doesn’t much matter. 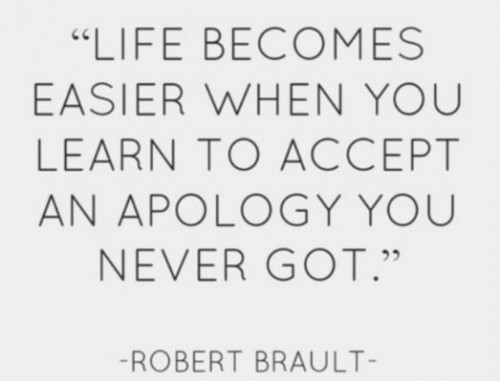 Once upon a time, I read somewhere that it can be helpful to write a letter to the person who hurt you, to explain the ways in which you were affected by their actions.  Then, step into that person’s shoes and write a letter of apology back to yourself.  The idea is to foster compassion and soothe your own pain.  Many people report feeling better after reading and re-reading the apology letter.  I guess it’s kinda like forcing a smile when you’re sad— the brain gets tricked into thinking you’re happy, and your mood starts to shift.  All with zero action from anyone else.

All of that being said, what does it matter if Rielle Hunter (or any other Other Woman) apologizes?  It doesn’t.  Apologies don’t change the past, nor do they remove pain.  Apologies, like forgiveness, are a selfish act.  They are offered if/when an offender feels ready to make peace with him/herself.  It’s not up to the rest of us to condone or condemn the action.  We’re free to move on (or not) regardless.