The Stories of Our Lives - Relative Evolutions

Once upon a time, there lived a couple named Jack and Janice.  Jack and Janice were both well-educated individuals with high-paying jobs.  They lived in a beautiful home they built themselves, nestled in the woods and surrounded by hiking trails they’d cut with their own tools.

After eight years of marriage, Jack made friends with a younger woman at the gym.  Her name was Jenni and she’d fallen on some hard times.  Jenni had recently ended a long-term relationship with the man she thought she’d be with forever.  She was having a difficult time making ends meet without a second income in her apartment, and to top it off Jenni’s employer was flirting with the idea of downsizing.  No doubt her position as a file clerk would be one of the first to go.

The two continued to talk as time passed.  Jenni just couldn’t seem to catch a break.  There were fights with girlfriends, estranged parent troubles, creditors calling night and day… Jenni was glad to have Jack’s shoulder to lean on.  A combination of pity (on his part) and desperation (hers) gave way to “love”, and the two began a heated affair.  Jenni felt safe with Jack, and Jack liked the feeling of being needed.

Back at home, Janice suspected something was wrong.  For months, Jack seemed distant.  He was spending more and more time at the gym and less time hiking with Janice and their dogs.  He was grumpy and seemed annoyed by everything Janice said and did.  Something inside her suggested there might be another woman, but she buried the thought beneath additional housework and trips to the beauty salon.

When the truth finally surfaced, Janice packed what she could fit into a small box truck and she moved far away with the dogs.  As Janice began a new life in a different state, Jenni and her cats moved in with Jack- just in time before receiving a final eviction notice from her landlord.

A few months went by and Jenni got pregnant.  The new couple eagerly made plans for their family, and they never spoke of the woman who not-so-long-ago occupied Jenni’s side of the bed.

At the baby shower, Jenni gushed to a neighbor about her Prince Charming.  “It’s like a Cinderella Story!” she exclaimed.  “I was poor and hopeless.  But then he rescued me, and now I’ll never have to worry again!”

Across the room, Jack was talking to his brother.  “Jenni’s had a rough time,” he explained.  “Even this pregnancy was an unplanned setback for her.  But she’s a real diamond in the rough.  Eventually, I’ll pay for her to finish school.  Whatever career she chooses, she’ll be great at it.”

Several hundred miles away, Janice explained her story to Julie, a new co-worker.  “He didn’t even care that I left,” she said.  “And so, here I am, a washed-up and worthless Victim of Jack.”

“What?” Julie asked with surprise.  “Honey, you are an angel!  Do you realize what an amazing thing you did?  That poor girl back there had nothing.  She couldn’t take care of herself at all, and you could.  You gave her your home and your husband, and you saved her from a life of who-knows-what on the streets!  In the meantime, you stood tall and moved yourself here to start over- because that’s what strong people do.  Washed-up and worthless victim?  Ha!  Think again.”

Funny how things can change with perspective, isn’t it? 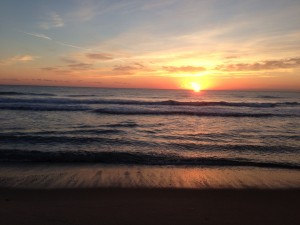 Rising or setting? End or beginning?