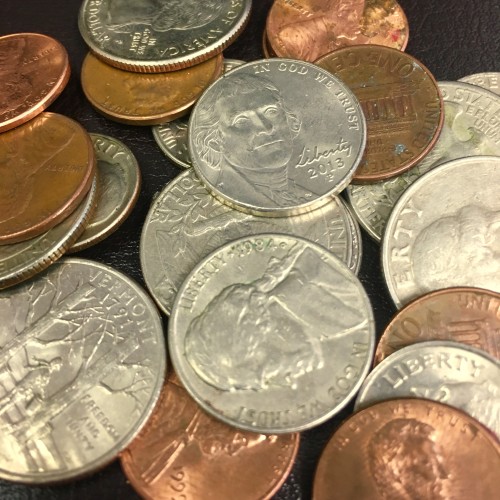 When it comes to money, use good sense.

Until a few months ago, I was under the impression that money was all about math. I thought personal budgets were the employment of simple equations, stocks were graphs, risks were variables, etc. I suppose, in the purest sense, I may have been correct. However, when considering the way money functions in our lives, I was way wrong. Learning how to go about managing your money is key, without a doubt, but it is quite a deep topic once you really get into it.

Several months ago, a friend of mine introduced me to the book, Crazy About Money: How Emotions Confuse Our Money Choices And What To Do About It. A couple weeks ago, I was fortunate enough to sit down with the author, Maggie Baker, for a chat about money, emotions and relationships.

First we talked about money and marriage… and divorce. Maggie told a (probably common) story about a woman who wanted to rent a house after separating from her husband. While she was married, the woman allowed her husband to handle all of the finances and as a result, she found herself with a poor credit rating and needed someone more credit-worthy to sign the lease with her.

“…Women leave themselves so incredibly vulnerable if they let their husbands do all the finances. Because if they do get divorced, they have no credit worthiness and they have to assume his. And, you know, maybe it’s good, but maybe it’s not.”

In the book, Maggie talks about the different personas around money. I imagine women who end up in this situation are Money Avoiders- it’s probably much more comforting to turn over the finances to one’s trusted partner. Unfortunately, such a plan can have disastrous consequences regardless of whether or not a couple separates.

Maggie talked about how the finances are handled in her marriage…

“My husband and I separated our finances. We have completely separate accounts because there’s enough difference in the way we spend and enough difference in how hard we work. Even though both of us are very hard workers, it’s really interesting. We work about as hard, but I’m much more vigilant about collecting what I’m owed and he’s not particularly, because he just doesn’t think about money. And consequently he ends up making a lot less. And that’s where money vigilance pays off… He’d go out and he’d wanna buy X, Y and Z and he’s not a spendthrift at all. But, I’m so careful with money… And now, if he wants to buy it, God bless him! It’s great, I love it… We’ve done that now for about seven years… We keep everything completely separate and he has very little interest in what’s going on with it. And I like all the things you have to deal with that come with it.”

I enjoyed hearing about Maggie’s arrangement with her husband. Separating finances and maintaining independent accountability and responsibility can save a lot of stress in the relationship. It also allows for a cleaner financial break in the event of a divorce.

“The most important thing is to have a balanced attitude. To have a certain kind of flexibility about how you handle money, so that you have a golden mean. So that you’re not too expansive and generous and you’re not too stingy and hoardy. But, it’s hard because the emotions are so complicated and the learning around money is so complicated. It’s hard to be the golden mean. Most people are extreme in one way or another and then they get caught up in really bad habits…. I think a lot of people feel a great deal of shame about the level of credit card debt they carry and they don’t want anybody to know that. But at the same time, I think that people are far more comfortable having a lot of credit card debt. They figure, ‘Everybody else does too, I’m no different from anybody else.'”

We talked about parents and the desire to help their children. I brought up the fact that so many divorced parents feel a heightened sense of responsibility to be the Best Parent They Can Be and yet in many ways, this can prevent some individual growth on the part of the parent as well as the child. Single parents need to take care of themselves first and foremost, so they can exhibit a complete and whole-hearted example for their children. Sometimes a parent has to step away from the role of being a provider. Maggie went on to further discuss a topic she addresses in the book…

“What I see that really scares me is that with this generation, there’s been so much investment in the kids being successful so that they do well at college but then end up coming home. Which has got to feel like a failure in some way. And they can’t get a job and here’s this kid that’s been highly nurtured to feel that the most important thing in the world is their success, and nobody’s going to hire them. And then if things continue to not evolve, then very often the parents step in and out of their own sense of frustration and guilt and feeling like they failed because they can’t help their kid, they may start to raid their retirement money to support the child… To do more education, which may not really be what’s called for. So my whole value in what I want to impart to the reader is, take care of yourself, you have to learn to see that you can’t fill in the blanks with money. And you have a right to hold onto that money for yourself. Even if it means denying your most loved child. Because what will help the child much more is to sit down with the kid and help them figure out what they’re going to do. Not ‘Oh, they’re in pain, I’ve got to provide.’ Especially for women, it’s almost reflexive. And what do they do? They spend their retirement money to help their kid out and then when they get old, they have no retirement money and then they’re dependent on their kid, who may have hopefully done well, but still most people don’t want to be in that situation…

As the conversation continued, we talked about how emotions and money factor into a divorce, beginning with the costly decisions people make in order to avoid losing money (such as paying a lawyer $10,000 to receive another $5,000 from the settlement of the house)…

“And that’s the whole point of loss aversion, that under circumstances of feeling the pain of loss or the risk of losing money, that people do things that are far riskier than if they’re not feeling that pressure… And if they’re vengeful in their heart against the person they’re divorcing, then it becomes far more important to hurt that other person than it does to just get out of the situation. So they’ll spend thousands of dollars pushing their lawyer to do all kinds of nasty things to try to get vengeance and of course it’s never satisfied. And they’re out a lot of money and they were so blinded they couldn’t not do it.”

Money is a big stressor on a marriage and an even bigger one in the event of a divorce. What I loved so much about Maggie’s book was the way she pulled away the layers and exposed the emotional aspects and early programming that influences our attitudes about money. While some see it as a weapon or indication of power, others view it as dirty and shameful. Think about the judgments we make around the money-aspect of a divorce. Have you demanded a higher settlement? Have you offered a higher settlement? Did you consider your ex to be financially abusive? Did you agree to let him/her have all the money if only you could have the kids/house/dogs, etc.?

I asked about the effect all of this has on children. Even the most cooperative parents can’t hide all of their frustrations from their kids. I wanted to know how such a situation might influence the way children grow up to think about money. In particular, I asked about the outcome of a “flipped script”- what happens, psychologically, when children go from having two parents who comfortably provide to living in a single-parent home where money is scarce. Although Maggie couldn’t relate any situations about her current patients, she did share an interesting story about the sixteen-year-old daughter of parents who often argued about money. In a session with Maggie, the girl confessed that she was stressed about money, because her parents fought about it all the time. Her parents were surprised to learn their daughter felt this way because the truth was that they had plenty of money and simply disagreed often about how to spend it. Maggie explained…

“She was picking up their emotionality and not the reality of the fact that they did have enough. That’s what happens to kids all the time; they don’t necessarily know the reality of money but the pick up the affect. They pick up the emotion behind it. If there’s a lot of intensity and negative emotion, then kids, being as narcissistic as they are and thinking that everything is about them, they’ll start thinking ‘oh, what’s wrong with me that my parents are fighting about money? Maybe I’m too demanding…’ They think that they caused the money shortage or the money fight, just like if they’re getting divorced; they think they caused the divorce. That’s the most important thing with little kids. They’re immature cognitively, so they can’t put the pieces together… The steamed upedness is what the kids pick up on, without any facts. So you either end up with an avoider or somebody who feels that they’re a burden and aren’t worth anything.”

This is important to note, regardless of one’s marital status or bank account balance. Children are perceptive and they pick up on adults’ feelings very easily. It’s not enough to simply teach children to be responsible with money. Part of writing a healthy script is to maintain one’s emotional equilibrium where cash is concerned. If you’re stressed about money, the kids will be as well, and this might not bode well for that monetary golden mean you want them to attain in the future.

As the conversation wound down, I asked if “money” is a topic everyone should discuss in therapy…

“Absolutely, but nobody does. Since I’ve been doing this and had this emphasis, I get people to talk about money, but I have to be active in asking otherwise they won’t talk about it. The only way it comes up in therapy is setting the fee and if someone can’t afford it. When I was being trained, nobody talked about money. And yet it’s the number one stress in peoples’ lives.”

After reading the book and considering its content, I have to agree. Money is important for many reasons. Understanding how we feel and how we use it is key to understanding a whole new aspect of our lives. This self-knowledge can help us unlock doors to less stress, better budgeting and financial freedom. In turn, the result will likely be better relationships, more positive parenting and a more cooperative marriage or separation.

If you’d like to learn more about Maggie, you can check out her web site at maggiebakerphd.com. If you order Crazy About Money through the site, she’ll send you a signed copy along with a bookmark and a money awareness exercise.