You don’t have to be divorced to know conflict.  We have conflicts with people in all areas of our lives:  our parents, children, coworkers, cashiers, neighbors, friends, friends-of-friends, random people on Facebook… this list goes on…

Most of the time, true peace and healing (for both sides) comes from collaboration.  That is, when both sides are willing to sit down and dive deeper into the issue in an effort to find understanding and creative solutions.  As a mediator, I see this process in action.

Collaboration.  That’s what I want to talk about right now.

Last weekend, I did a really incredible thing…

I was fortunate enough to spend Mother’s Day 2019 in the belly of one of Mother Nature’s greatest creations.  At 6:30am, my friend and I began a 6-hour/7-mile hike into the Grand Canyon.  It was a beautiful, magical, awe-inspiring, hot, sweaty, painful, torturous journey.  And after completing the hike out the following day, I took some time to reflect.

I came to the following conclusion:

The Grand Canyon is a great metaphor for conflict.

Here’s what I mean… 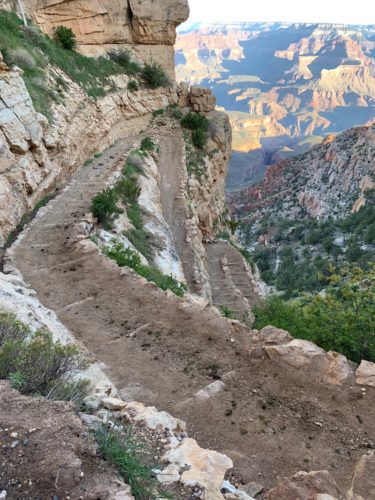 Like I said, conflict can only be truly solved by getting closer… by going into it.  By collaborating.  And then…

Mother Nature can teach us so much 🙂

Of course, I realize that not everyone will have the same perspective and same experience as me.  There’s a sign at the rim of the canyon that reads:

“After your first experience backpacking in the Grand Canyon you will be left with one of two reactions: either you will never hike again in your life, or you will find that your life up to this moment has been meaningless, and you will be forever enslaved by thoughts of returning to this torturous paradise.”

In my list above, I stated that you can find peace in conflict.  Not everybody does.  Some run away from the experience, screaming and swearing never to try again.  And like I said in the beginning, some avoid conflict entirely because they find the environment too dangerous to venture in to begin with.  Each situation is a bit different, and that’s OK.

Another major factor in hiking the Grand Canyon is that it’s imperative to know your limits.  Same goes for conflict.

Not every attempt to find common ground will result in a prosperous peaceful new relationship.  But there’s something to be said for the personal growth that comes from making the effort.

Whether a canyon or a conflict, I encourage you to explore it a little deeper.