With the exception of a few personal favorites, celebrity marriage and divorce isn’t a topic I watch closely. However, a few days ago, I was reading an article that referenced Jennifer Aniston’s Post-Brad interview with Vanity Fair. I wasn’t familiar with the piece, and (given the topic) I was curious. So, I did some searching and found the interview. I read it on my phone, in my kitchen, a few paragraphs at a time, while attempting to make my own dark chocolate almond butter cups (what an adventure that was!).

The interview captures Jen as a raw and real human being, finding her way after her world turned upside-down. She came across as wounded, yet hopeful. She was in the process of healing, of reconnecting with herself… of indulging in comfy couches. I thought her to be the embodiment of strength and dignity… a role model for all women scorned.

When asked about marriage, she said something interesting: 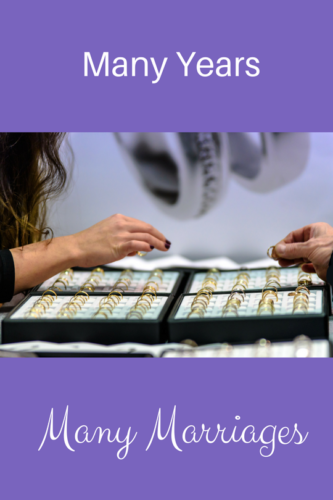 A ring for each marriage?

She’s right. Couples who stay married for decades actually live through multiple incarnations of their partnership. The union of two almost-broke twenty-somethings is a lot different than the marriage of middle-aged middle classers with kids in middle school… and that marriage is different from that of retirees spending their golden years in a condo near the beach.

A more extreme example: Kody and Meri Brown (from the show Sister Wives) had a “normal” monogamous marriage before transitioning to a plural marriage when Kody married Janelle. And those individual partnerships ended and were created in a new form with the addition of wives #3 and 4.

People change. So do relationships.

As minds open and the conversation broadens, there’s talk about “Starter Marriages” and structuring marriage to be a renewable contract. I like those ideas… but now I’m realizing that, in reality, this verbiage only serves to describe what happens in real life. Thinking back to my own scenario (the short-and-simple version):

I chose the marriage in which my husband and I lived in a small town and were both devoted to our careers. After some time, my husband wanted a different marriage:  one in which we adopted more traditional gender roles while we raised children. I didn’t. Essentially, it was time to renegotiate the contract of our marriage, and we couldn’t come to an agreement. As a result, the partnership ended and we did not create a new one.

All of this further illustrates the fact that we (as a culture) need to STOP SHAMING PEOPLE WHO GET DIVORCED. Even those who celebrate their 75th anniversary have enjoyed/endured more than one marriage. That’s just the way it is.