I was never a huge fan of Brangelina, though there were elements about the couple that I found charming. I liked the fact that they’d adopted children. I thought it was cool that Shiloh was born in Africa and later they were so accepting of her desire to be called “John.” I found their wedding story to be incredibly sweet. They’d been together a long time (especially in Hollywood Years) and they’d weathered plenty of tabloid storms.

Still, I never quite fell under their spell. I knew they weren’t especially special nor magical. Brad and Angelina were simply two human beings sharing their lives. And sometimes the day comes when such arrangements are no longer appropriate. 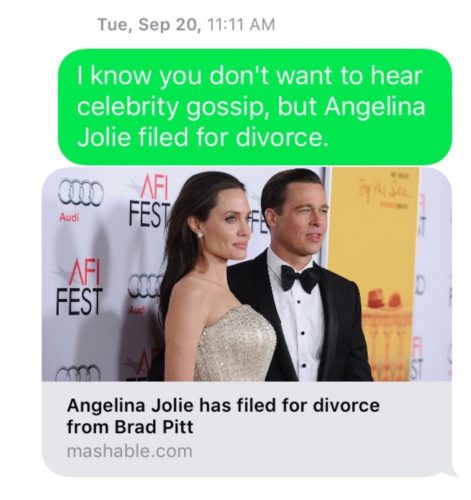 I read about the divorce on September 20, around 11 o’clock in the morning. I only know this because I shared the news with my sister via text. For the rest of the day, I followed the headlines as they appeared in my Facebook feed. I clicked on a few articles, but most said the same thing:  papers had been filed, their first concern is the children and they’d appreciate some privacy. And then there was that one deliciously satirical piece about Jennifer Anniston’s reaction, which put everything in perspective.

Truth be told, I was a bit excited. Not because Brangelina was breaking up, but because I was sure Brad and Angelina would do so in a respectful and responsible way. I looked forward to an announcement about consciously uncoupling. I fantasized about the family continuing to vacation together on occasion. I… I just knew that The Perfect Couple would execute The Perfect Divorce, one that anyone at the end of a partnership would aspire to emulate.

Boy am I disappointed.

I’ve not been following the saga on purpose, but I don’t have to. Over the past two weeks, I’ve passively learned that Angelina has temporary full physical custody and Brad is currently entitled to supervised visitation. Apparently this is due to allegations of child abuse and excessive alcohol consumption. Meanwhile an old video of Angelina discussing some Illuminati sex rituals of her past has surfaced. And Melissa Etheridge has spoken out to support Brad and disclose Angelina’s nasty side.

And though there is hope that the drama will decrease, the stage has already been set. The public has been given reason to blame and the media is free to shame. Friends are taking sides. Children are suffering. What I’m seeing is the beginning of a typical, traditional, angry, nasty divorce.

My hopes have been shattered. …But then, what did I expect? I’ve always known they were just regular people operating under a spotlight. Regular people, no matter how beautiful they are, have shadows and uncomfortable emotions. They see the world through their own filters, just like the rest of us. It was unfair of others to expect their marriage to last, and it was unfair of me to assume they’d display a wonderful divorce.

Divorce is a human process, and humans are messy creatures. As the Brangelina Train evolves toward separateness, I wish all passengers peace and perspective. They are, now and forever, still a family.