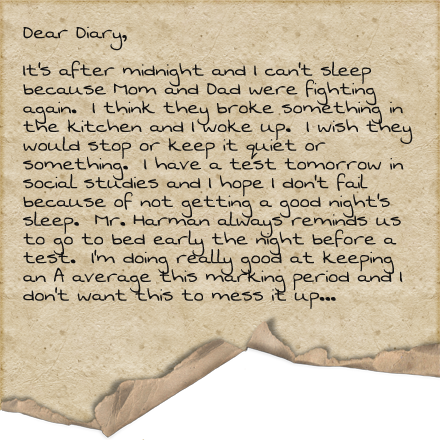 For more about Gina (and her parents fighting), check out my book, The D-Word:  Divorce Through a Child’s Eyes

I only recall a handful of times when I was awakened in the night by my parents’ arguments, but that was enough.  I remember the irritation, the stress (sometimes it lasted for days afterward), the curiosity…  I remember being wide awake after the fight was over and feeling like I’d never get back to sleep.  There were times when I wanted to get up and make a trip to the bathroom or to the kitchen for a drink, yet I was afraid to move from my bed because I didn’t want my mom and dad to know I hadn’t slept through their turmoil.

By the time my parents divorced, I’d adopted a rather irregular sleeping preference of staying up extra-late and taking long naps in the afternoon.  I don’t know if this had anything to do with those late night fights.  I can say for sure that, whether I was staying up with a good book or drifting into dreamland, it was a relief to count on silence in the house until the alarm clocks began chiming in the morning.   Quiet nights were a noted blessing from the Divorce Fairy.

During my own marriage, my ex and I often fought late at night.  Sometimes we’d stomp and scream and other times I’d grab my car keys and drive until my rage dissipated, often leaving myself very little time to sleep when I returned.  In hindsight, I wonder if it all would’ve went down that way, had there been little ones sleeping in our spare bedrooms.  Unfortunately, I don’t think it would’ve made a difference.  My ex and I married young and neither of us was as evolved as we are now.  I know, in my previous relationship, not only was I more skilled at managing conflict, I was also mindful of the boys’ location, hearing abilities and stress level whenever their father and I disagreed.

How about you?  Do/did you fight with your partner late at night?  Was it productive or destructive?  Did you hear your parents fight?  Are there any regrets or lessons learned that you’d like to share?