It’s no secret that I’m not a big fan of weddings.  Over lunch last week, I had a conversation with some friends about why they attend such events.  The answers varied:
“To meet drunken bimbos”
“To support the couple” (funny how soooo many people show up to “support” the couple at the wedding, but then disappear during a divorce when people really need support)
“To meet new people”
“To see people I haven’t seen in a long time”
“They’re fun.  It’s a big party with drinks and dancing!”

On June 26, I attended a wedding because I was the daughter of the bride.  Despite my efforts to convince my mom to elope or try out my Better Way to Wed proposal, the happy couple insisted on a semi-traditional ceremony.  I was not exactly looking forward to it.

The event took place a couple hours away from where I live and my sister, my mom’s best friend and I were all quite dismayed to find that, after getting a late start, our GPS devices had navigated us to the wrong location and we were even more late in beginning the hair-and-makeup affair.  I was not in a good mood (f*ckin’ weddings!), but things got better.

The hair-and-makeup affair was quite comical.  I sat back with the camera and snapped away amid the chick chatter:

“I think you should curl it under…”

Every few minutes I chimed in to tell Mom how nice she looked.

We were late heading to the ceremony and the minutes before departure featured the typical last-minute franticness:  Mom running around with half her dress on, people deciding who is riding with whom, who is following, who is carrying the flowers and how much time do we have?!?!?  But that was where the typical matrimonial antics ended.

It was all very down-to-earth.  The ceremony was in a park, on a bridge over a creek.  They actually had to stop about 30 seconds into it because there was a train roaring through the area, and everyone laughed about it.  The bride and groom each only had one attendant with them and there were no standard uniforms.  The guests, about 50, stood around and took pictures as they pleased.  The ceremony lasted about 10 minutes (including the time we waited for the train).  And the “reception” was a picnic which immediately followed the ceremony in a nearby pavilion.  There were a lot of pictures, and that was rather annoying for all of us (most of the guests were included in the pictures), but the photo sessions didn’t last long.  Mom and her husband changed out of their bridal costumes as soon as they could and most of the guests weren’t dressed up to begin with. There was no announcement of the bridal party, no “first dance”, no “dollar dance”… just food and a DJ and a cake that looked like a present (the only one because the couple specifically requested “no gifts!”)- no tiers and no bride and groom topper.  No announcement in the local paper, no unity candle, no expectations of (further) reproduction… and the whole thing was over at 3pm!  As far as weddings go, I think it was the best one I’ve been to (and did I mention the fact that my dad was there?).

My mom and stepfather (…there’s that label again) are currently enjoying their second week of no-work-and-all-play.  They decided against a big honeymoon and instead are staying in the area, taking in the local sites and appreciating that which is close to home.  I wish them a balanced budget, common goals, effective communication and lots of laughter as they embark on this new chapter in their lives. 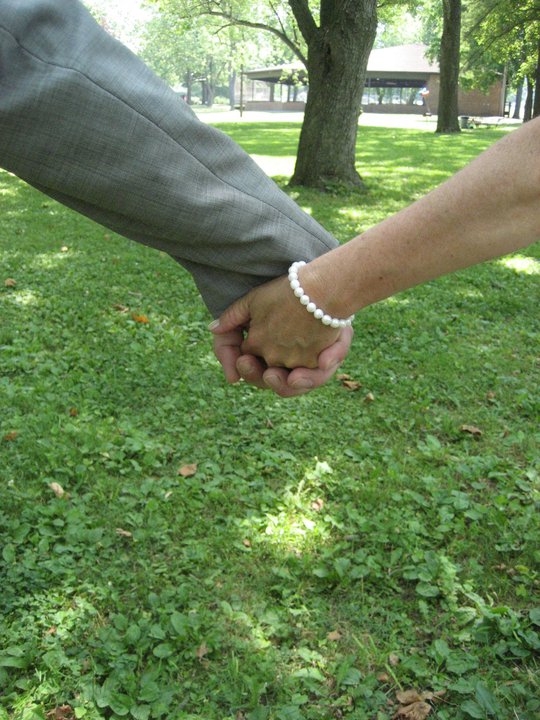 Photo courtesy of my new stepsister!